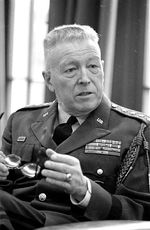 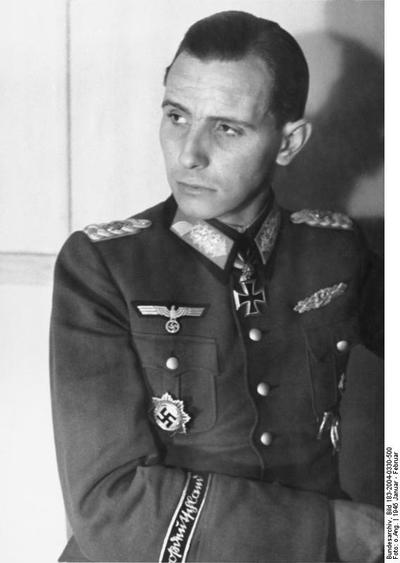 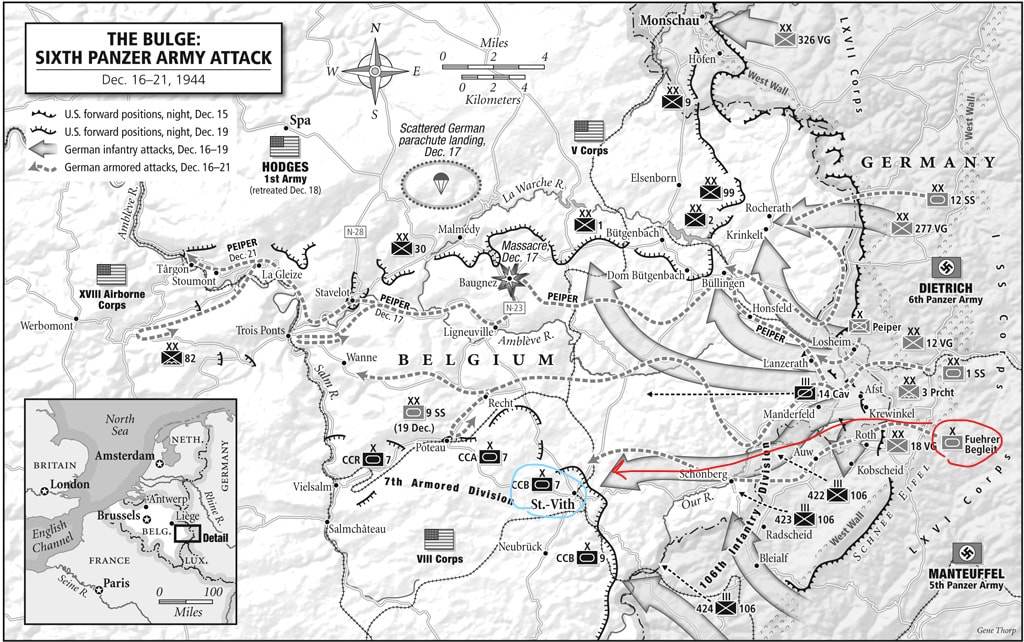 HISTORICAL SCENARIO FOLLOWED BY FIG MAPS AND HISTORICAL MAP OF RODT
As lead elements of the German Fifth Panzer Army move west, the initial rapid advance has stalled.
Delays on the Sixth SS Panzer Army's northern axis have made it difficult to sustain forward momentum,
even though the forward regiments of the US 106th Infantry Division have been cut off in the Schnee
Eiffel, the reserve regiment is intact, and reinforcements are moving to prevent a penetration near the
town of St. Vith. To the south of the town, CCB of the 9th Armored Division is arriving; to the north and
west, CCB of the 7th Armored Division is advancing; and in the local area small units of engineers and
artillery have occupied defensive positions. On the northern flank, CCA of the 7th is forming a line, with
two regiments of the 82nd Airborne Division moving in behind CCA.

Friday's scenario will re-create the following: The Fuehrer Begleit Panzergrenadier Brigade forms two Kampfgruppen; the northern one, KG
MICKLEY, attacks on an axis west and north of OBER-EMMELS and through the Bois d'Emmels woods, intending to turn the northern flank of the 7th Armored Division, secure the town and junction at BUCHENBURG, then drive south to CCB rear near HINDERHAUSEN. CCB assets are too limited to provide a continuous front. As elsewhere at the beginning of the offensive, forces available in the area are manning strong points at critical junctions and terrain features. BUCHENBURG and HINDERHAUSEN are defended by elements of the 40th Tank Battalion, 38th Armored Infantry Battalion, and the 7th Armored Division's 87th Reconnaissance Squadron. KG MICKLEY must turn the left flank of CCB, reinforced by advanced elements of the 82nd
Airborne Division, secure the main roads, and drive south to secure HINDERHAUSEN, threatening the rear of 7th Armored Division positions around ST. VITH.

Saturday's scenario will recreate the following: The second axis of advance chosen by the commander of the German force proceeds to the south of
KG MICKLEY, from OBER-EMMELS, down the main road to the east through FRODERVENN and into the major road junction at RODT. This move will require the Axis elements to locate and deal with the security screen of CCB and brush aside elements of the 38th Armored Infantry and 40th Armor,
reinforced by advanced elements of the XVIII Airborne Corps advancing from the west. CCB mustprevent the German forces from occupying the critical road junction NW of BUCHENBURG, which would threaten routes of resupply and possible withdrawal from ST. VITH by the 7th Armored Division. 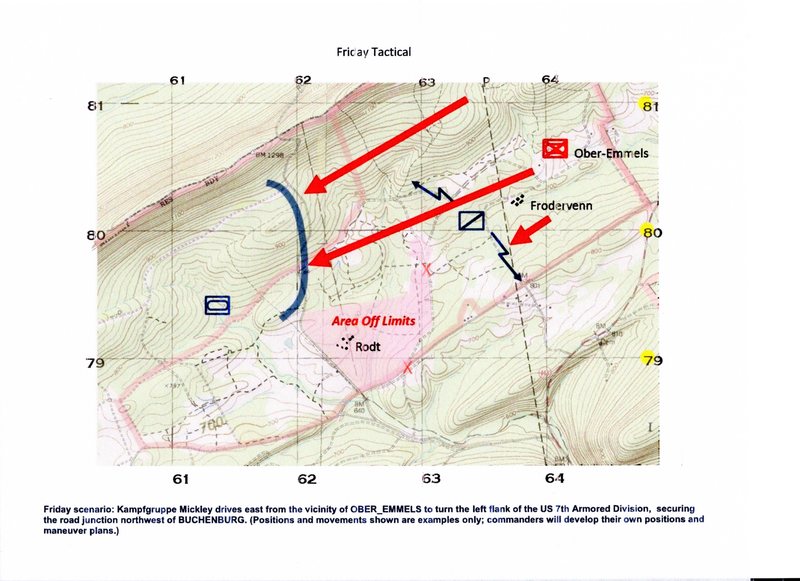 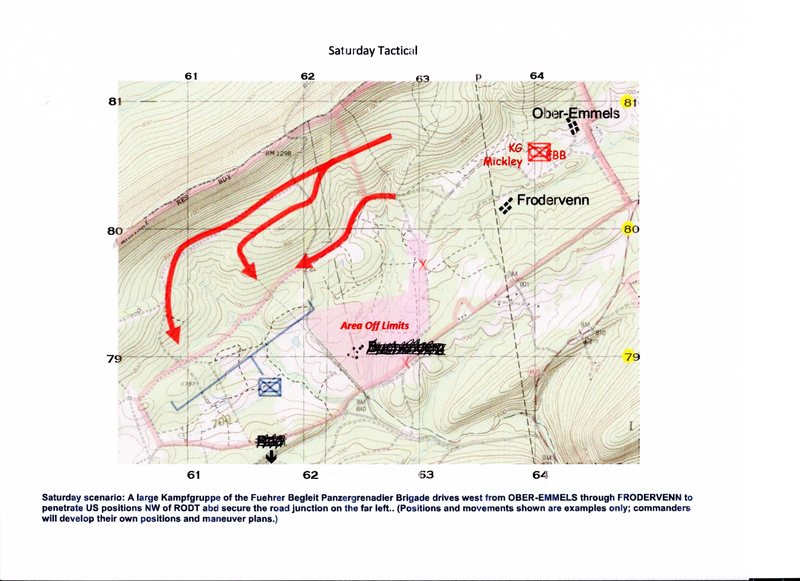 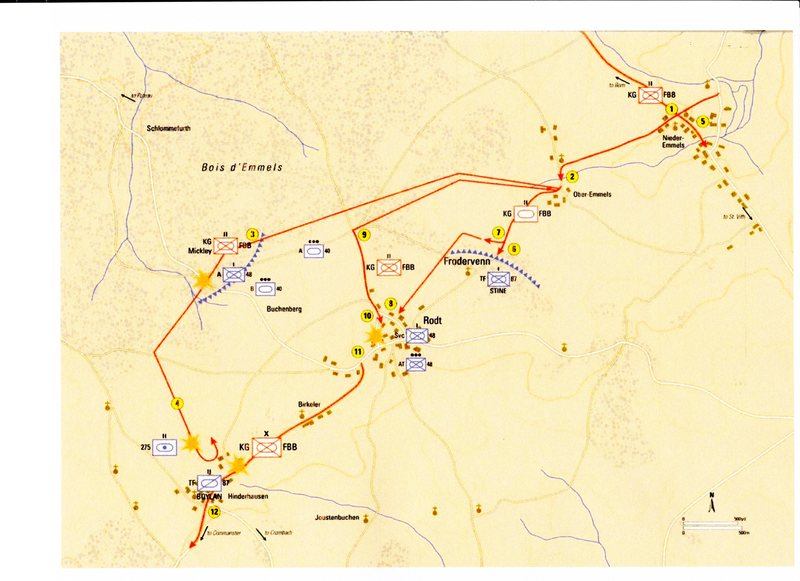 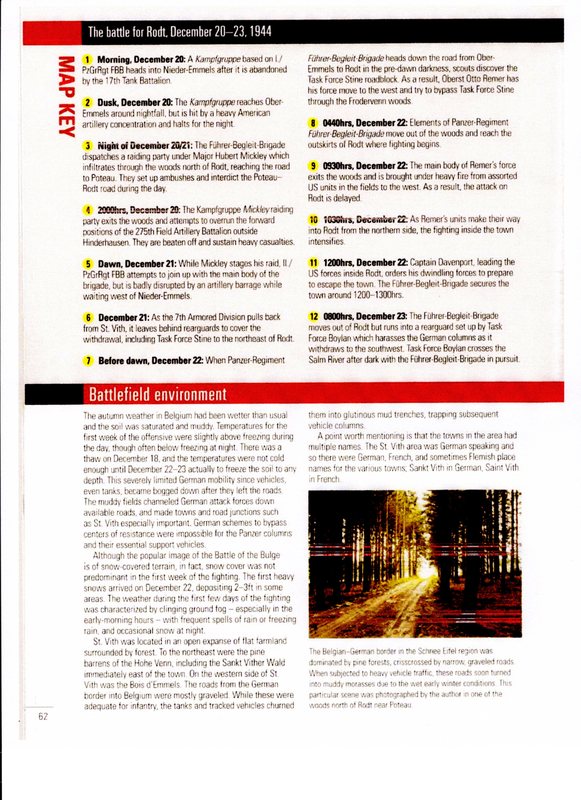